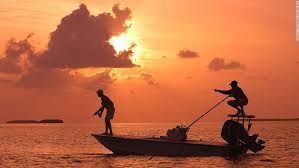 The Florida Keys are a string of tropical islands stretching about 120 miles off the state’s southern tip, between the Atlantic Ocean and Gulf of Mexico. They’re known for their laid-back vibe and as a destination for fishing, boating and scuba diving. Key West is famous for Duval Street’s many bars, Mallory Square’s nightly Sunset Celebration and the Ernest Hemingway Home and Museum.

The Florida Keys are a coral cay archipelago located off the southern coast of Florida, forming the southernmost portion of the continental United States. They begin at the southeastern coast of the Florida peninsula, about 15 miles (24 km) south of Miami, and extend in a gentle arc south-southwest and then westward to Key West, the westernmost of the inhabited islands, and on to the uninhabited Dry Tortugas. The islands lie along theFlorida Straits, dividing the Atlantic Ocean to the east from the Gulf of Mexico to the northwest, and defining one edge of Florida Bay. At the nearest point, the southern part of Key West is just 90 miles (140 km) from Cuba. The Florida Keys are between about 23.5 and 25.5 degrees North latitude.

The climate of the Keys is defined as tropical savanna according to Köppen climate classification. More than 95 percent of the land area lies in Monroe County, but a small portion extends northeast into Miami-Dade County, such as Totten Key. The total land area is 137.3 square miles (356 km2). As of the 2010 census the population was 73,090 with an average density of 532.34 per square mile (205.54/km2),[1] although much of the population is concentrated in a few areas of much higher density, such as the city of Key West, which has 32% of the entire population of the Keys. The US Census population estimate for 2014 is 77,136.

The city of Key West is the county seat of Monroe County. The county consists of a section on the mainland which is almost entirely in Everglades National Park, and the Keys islands from Key Largo to the Dry Tortugas.